Australia’s new car market has had a solid start to the year with new car purchases for January 2015 on par with January 2014 figures. This follows a strong sales year in 2014, with sales being the second highest ever.

Releasing the January 2015 VFACTS figures, FCAI Chief Executive Tony Weber said the trend towards SUV purchases was showing no sign of slowing down, with total SUV sales up 6.9 per cent on January 2014 figures. Small and medium SUVs showed significant growth, up 17.9 and 9.5 per cent respectively.

“The continuing popularity of SUVs is a reflection of the versatility of these vehicles. SUVs now represent 33.7 per cent of the market and we expect this trend to continue as we move through 2015,” Tony Weber said. 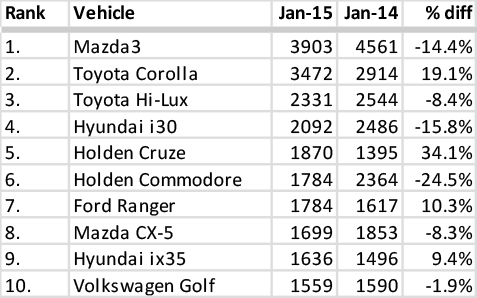 VFACTS monthly vehicle sales data is available at Midday on the 3rd working day after the end of every month. Select data and media releases on the sales results are available at www.fcai.com.au