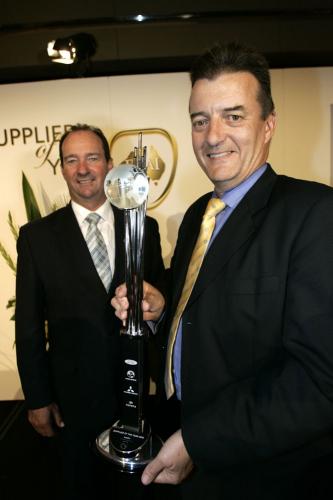 Now in its 20th year, the Supplier of the Year Award, made annually by the FCAI, is one of the most prestigious awards in the automotive industry.
Judged by the Purchasing and Supply Directors of the four vehicle manufacturers â€” Ford, Holden, Mitsubishi and Toyota, the Award winner is chosen from a list of dozens of finalists amongst component supplier companies.

This Award recognises the company with the highest level of performance in terms of product development, quality, timely delivery, competitive pricing, project management and customer service.

In 2006 Autoliv Australia won the coveted Award and was announced by the Deputy Prime Minister and Minister for Transport & Regional Services, the Hon. Mark Vaile MP at a dinner function in Melbourne on 22 November 2006 hosted by FCAI President, Mr John Conomos AO of Toyota Motor Corporation Australia Limited and attended by 200 industry guests.

Autoliv Australia is a worldwide leader in occupant safety systems with 80 manufacturing plants around the world. In Australia, Autoliv supply local manufacturers with both seatbelts and airbags, and a technology leader with the widest product offering for automotive safety.

The other finalists in the FCAI Supplier of the Year Award in 2006 were:

Robert Bosch (Australia) Pty Ltd
Robert Bosch Australia is a vital supplier of vehicle electronics to the Australian automotive industry and a leading developer of new technology for multinational car makers. The company has been manufacturing at its base in the Melbourne suburb of Clayton for 50 years - having started with ignition systems for the FJ Holden.

PBR International Limited
PBR International is a development leader in innovative break system solutions to OEMs and is at the forefront of brake design and manufacturing. PBR uses leading edge technology to achieve world standards in product quality and their brake system technology is featured on vehicles such as the Mazda MPV, Nissan Micra, Renault Clio and Landrover Discovery as well as Australia’s four vehicle manufacturers - Ford, GM Holden, Mitsubishi and Toyota.

Schefenacker Vision Systems Australia Pty Ltd
As Australia's only manufacturer of passenger car rear view mirrors for passenger and commercial vehicles, Schefenacker also design and manufacture electric actuators, memory and power fold systems and exterior door handles. With a well-proven reputation for success in meeting the needs of the automotive market, they export over 2 million exterior mirrors and over 11 million electric actuators per annum.